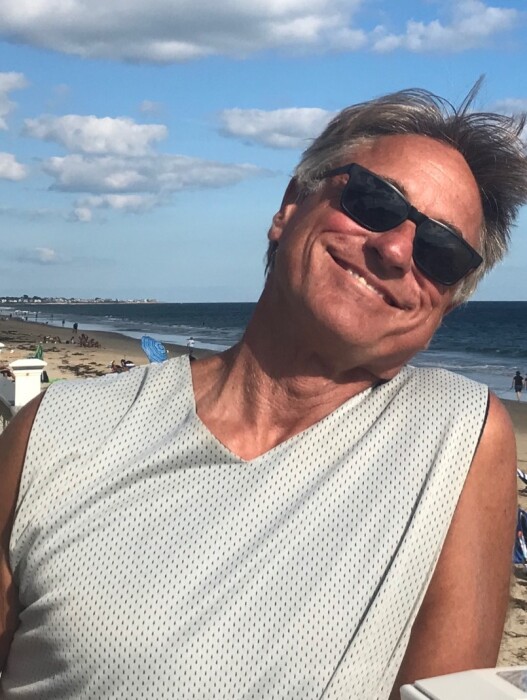 Daniel David Santomero (Dano), 64, of South Meriden, CT, after a six year battle with cancer, peacefully passed away Saturday July 17, 2021 at Connecticut Hospice in Branford CT, with a view of his beloved ocean. Dano was born in Meriden, CT and  later moved to Hilton Head Island, SC where he lived for many years. After leaving Hilton Head in 2004 Dano worked and played all over the country and world having visited Maine, Rhode Island, Florida, New Jersey, & Australia. When he returned to Meriden he would spend as much time as he could in Rhode Island surfing, biking, camping and living the beach life he loved so much. He loved to play ping pong with his friend Jimmy Merc and was in possession of the "golden trophy" the last time they played, no easy feat when playing against Jim.  He also discovered the love of Pickleball.  For the last several years Dano poured his energy into raising money for cancer research.  He was team captain for Remission Possible, his team gathered to participate in the yearly Smilow Closer to Free bike ride.  He rode 100 miles each year and was dedicated to funding research to fight cancer.  His team will continue his legacy.

Dano leaves behind his one sibling, Dina (Santomero) Prendergast and her husband Todd Prendergast, along with their two children, Ryan and Madison Prendergast, of Southington and many cousins. He also leaves behind his significant other, Susan Zanker and many dear friends: Jim and Linda Mercuri, Danielle, Jamie, Joe and Kristen Mercuri (son Joey and daughter Kate) Jim Sangiovanni, Jeff Lorenzo, Jonathan and many more to count.

The family would like to thank the staff at Smilow for their loving care. We appreciate all the support from everyone on Team Remission Possible.  Also, a special thanks to Janet, his CT Hospice nurse for all her support.

There will be a celebration of Danny's life at a later date, to be announced.

Plant a tree in memory of Daniel by clicking here.
To send flowers to Daniel's family, please visit our floral store.

A service summary is not available

Plant a tree in memory of Daniel
An environmentally-friendly option

Plant a tree in memory of Daniel

5 trees planted in memory of Daniel

So sorry for your heavy hearts.
Peace Love and Sweet Sweet Blessings, Kim and Jeff Mix

So sorry to hear Dan lost his cancer battle.   He was a long term customer who also worked in my State Farm Agency for a short time before heading out to Australia for another career adventure.  He always had a pleasant smile and positive demeanor about him.   With a common interest in beaching & cycling, will pledge support to Team Remission Possible in his honor.   My condolences.  RIP Dano!

No more pain.... I never had the pleasure of meeting Daniel but I grew to know him through Susan Zanker. The love they had for one another was a Storybook Romance, my heart goes all of you.
Nina Stall-Andrus and family

A Memorial Tree was ordered in memory of Daniel David Santomero by Nina Stall-Andrus and family .  Plant a Tree

I will always remember Dano he was my first friend, I have great memories of our going to the beach every summer when we were kids. Plus when our parents rented a cottage in Clinton one summer. He was a terrific guy and a good friend. I thank him for his advice when I needed it, thanks Dan I will see you on the other side.

A Memorial Tree was planted for Daniel David Santomero

Plant a tree in memory of Daniel